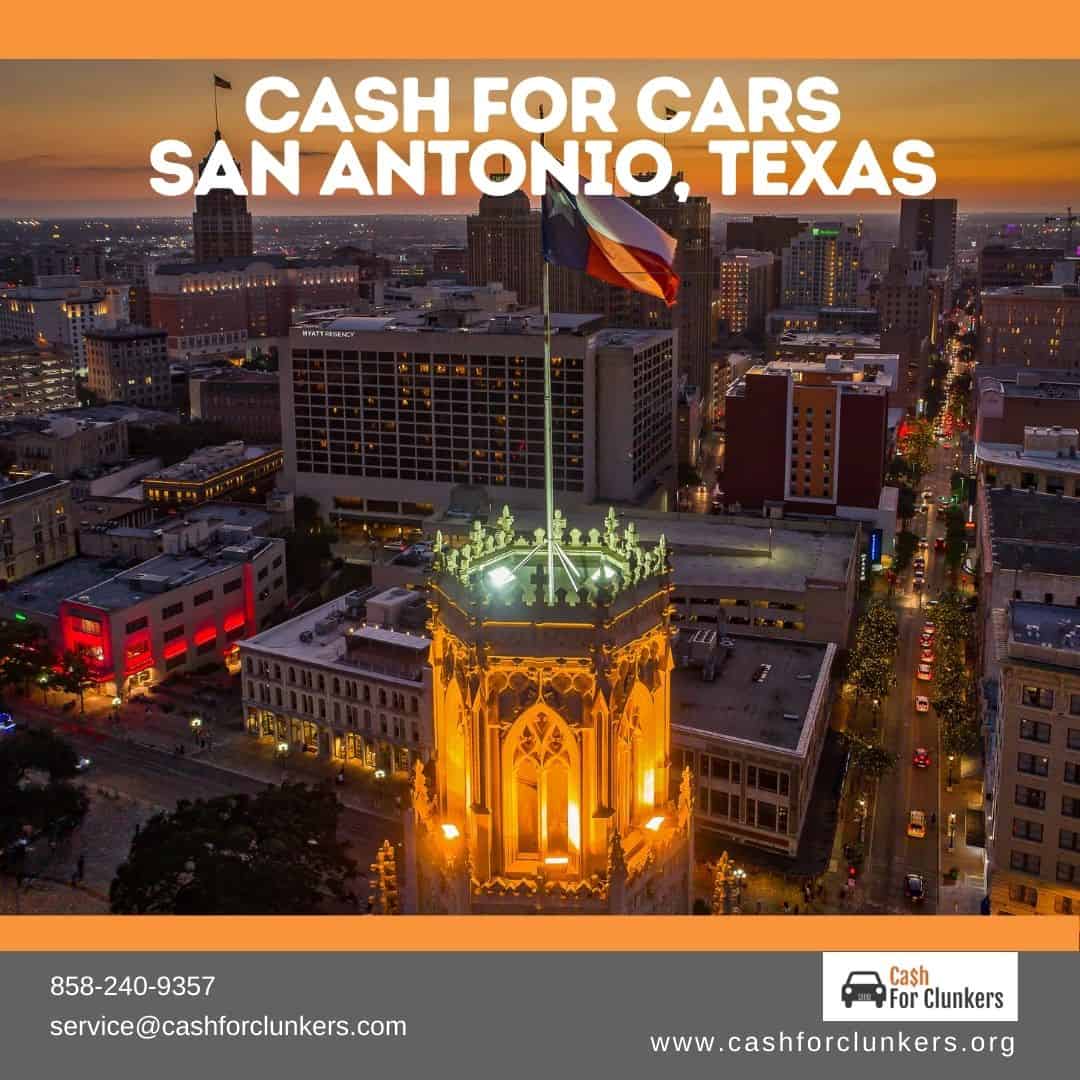 How to Find Fast Cash for Cars in San Antonio

San Antonio, the second-largest city in Texas, is located in Bexar County, which sits at the top of South Texas. Probably the most well-known spot in San Antonio, the Alamo, brings in over 2.5 million tourists every year alone. With all the traffic, locals need a reliable vehicle for navigating the city, but where can you get cash for junk cars?

At Cash for Clunkers San Antonio, we provide the best offer guaranteed with no obligation or nagging for you to accept! If you like our offer, we will get you cash for your used car or clunker as quickly as 24-72 hours. We also can help you with a lost title and will take any make, model, year, and condition of vehicle!

Keep reading to find out more about

As the 7th largest city in the States, plus many famous tourist locations, San Antonio gets a lot of traffic. With all this traffic, you’ll want a reliable vehicle for getting around in this tourist city. If you own an old, beat-down car, don’t go through the headache of trying to sell it to a dealer. Use our simple, easy, and quick cash for cars San Antonio program!

Originally the Alamo Roman Catholic Mission, the Alamo eventually served as a fortress, the last stand for a group of rebels fighting for Texan independence in 1836. It’s what gives San Antonio its nickname – the Alamo City.

Aside from the Alamo, San Antonio has much more to offer. The city is home to the largest natural cave in the states – the Natural Bridge Caverns. The caverns feature an awe-inspiring natural limestone bridge and other amazing formations. 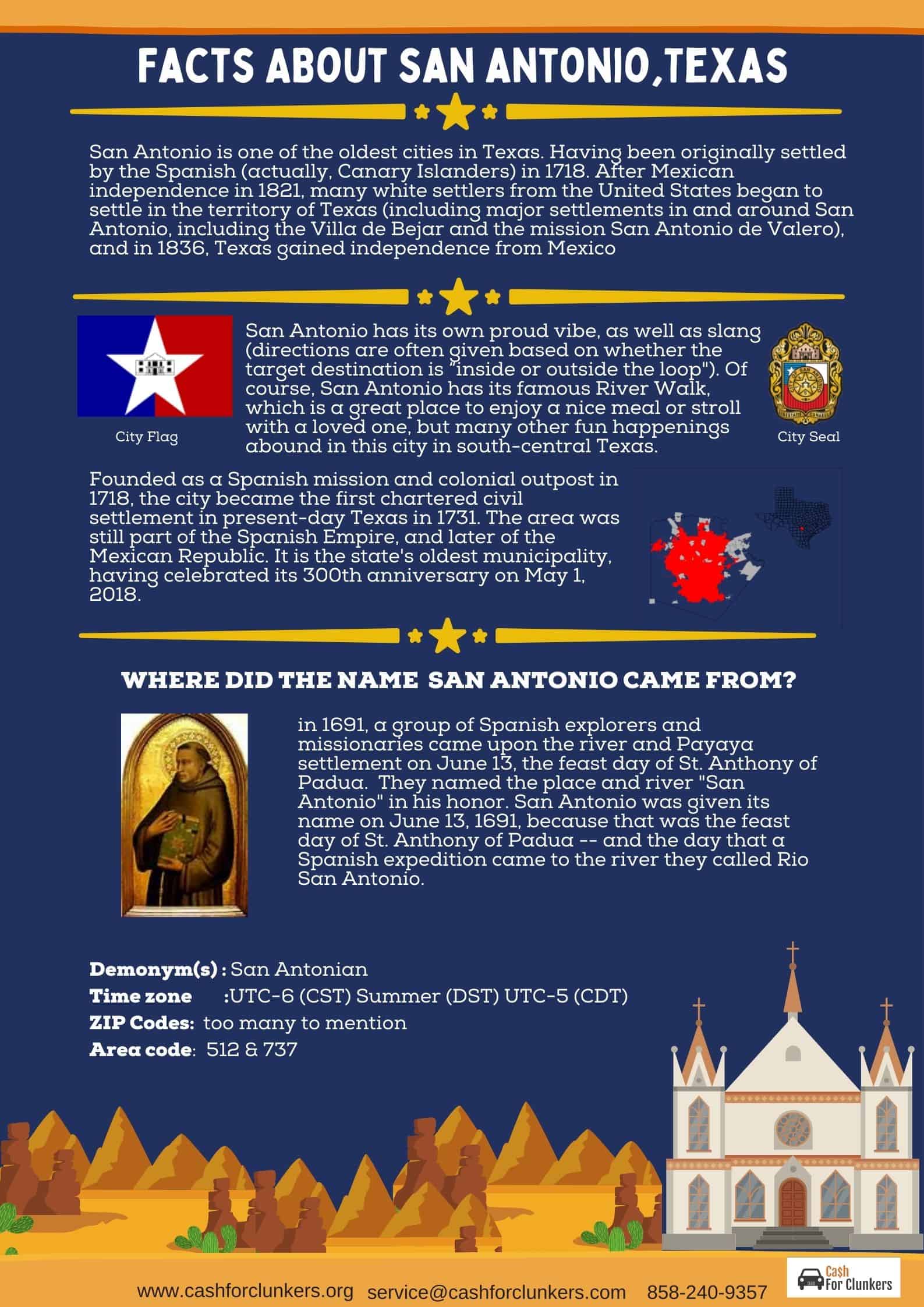 Also available to visit are Six Flags Fiesta, the Market Square, and numerous museums and historical landmarks, such as San Antonio Missions National Historical Park and the Museum of Art. San Antonio is also home to the San Antonio Spurs, 3-time NBA Champions. 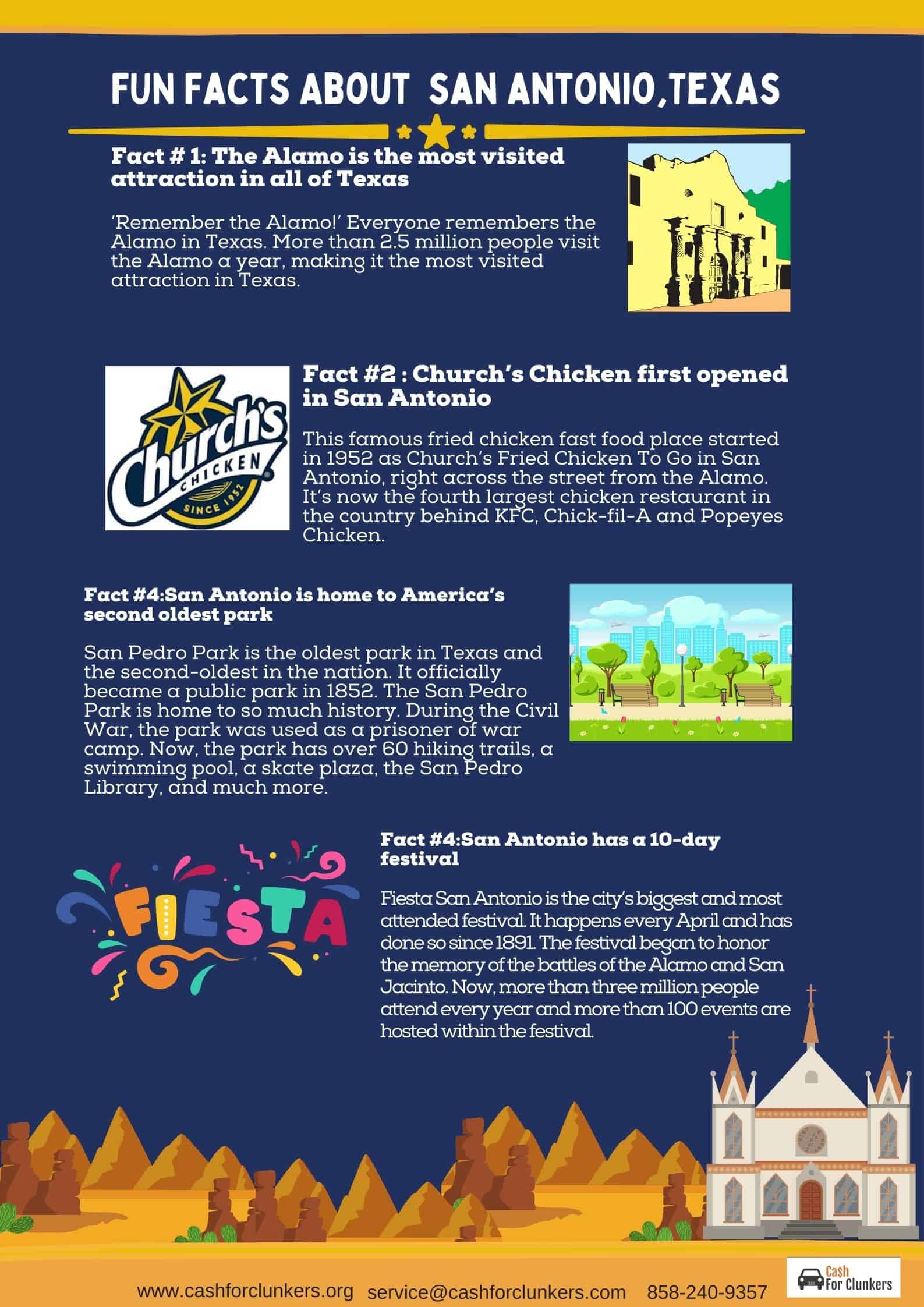 Our cash for cars San Antonio, Texas program offers an easy and quick solution for getting rid of your “unsellable” car. In just three easy steps, your unwanted junk car could be gone – and you can have cash in your hand.

You should also include where the car is for pickup. You can do this either in the anonymous online form or during a quick phone call with a representative. 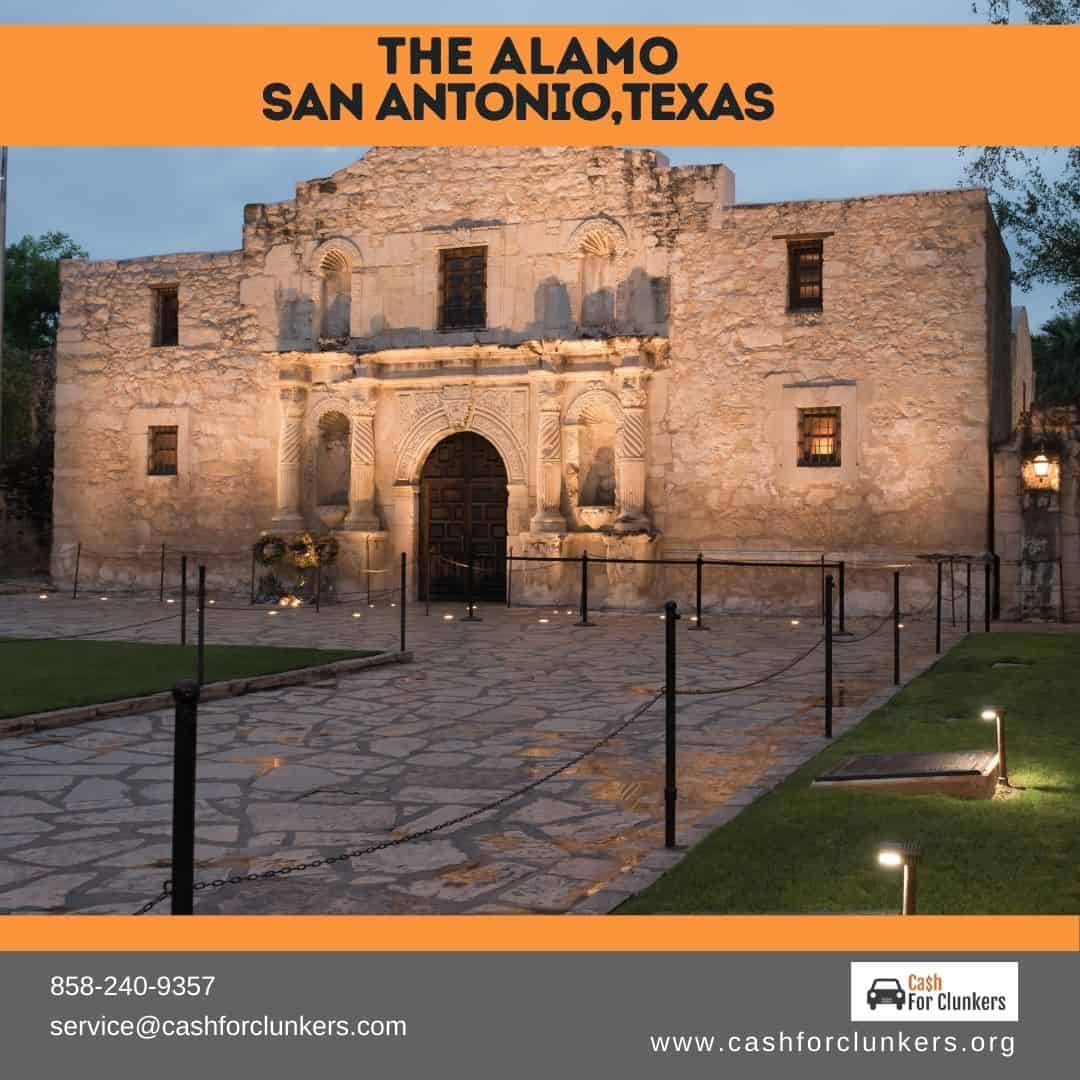 Within minutes, Cash for Clunkers will send you an offer. You have no obligation or expectation to accept. Here, all you have to do is take the offer or walk away.

Step 3: Get your Cash

If you decide to accept the offer, a representative will inspect the car and confirm the information given was correct. The last thing you have to do is sign some paperwork and get your cash.

From start to finish, you can have cash in your hand and your clunker out of the way all in one day!

What is a Clunker?

Once the upkeep costs are more than a new car payment, it might be time to get rid of it. Older cars tend to be highly polluting, unsafe, and a burden on owners. There are some obvious signs when your car can be easily labeled a “clunker” and it’s time to let go.

It might be time to let the car go if you have repaired it many times, but it hasn’t improved. Eventually, your repair bill will exceed that of the value of your car – it’s probably not worth it.

Many old cars lack the modern safety features that newer cars have, like proper seat belts, airbags, and built-in crumple zones to absorb impact. Your car could be a safety hazard to you and your family.

Over time, certain parts of the car – parts you don’t even notice – break down, rust, and become brittle. Your car could be unsafe in ways you aren’t even aware of. 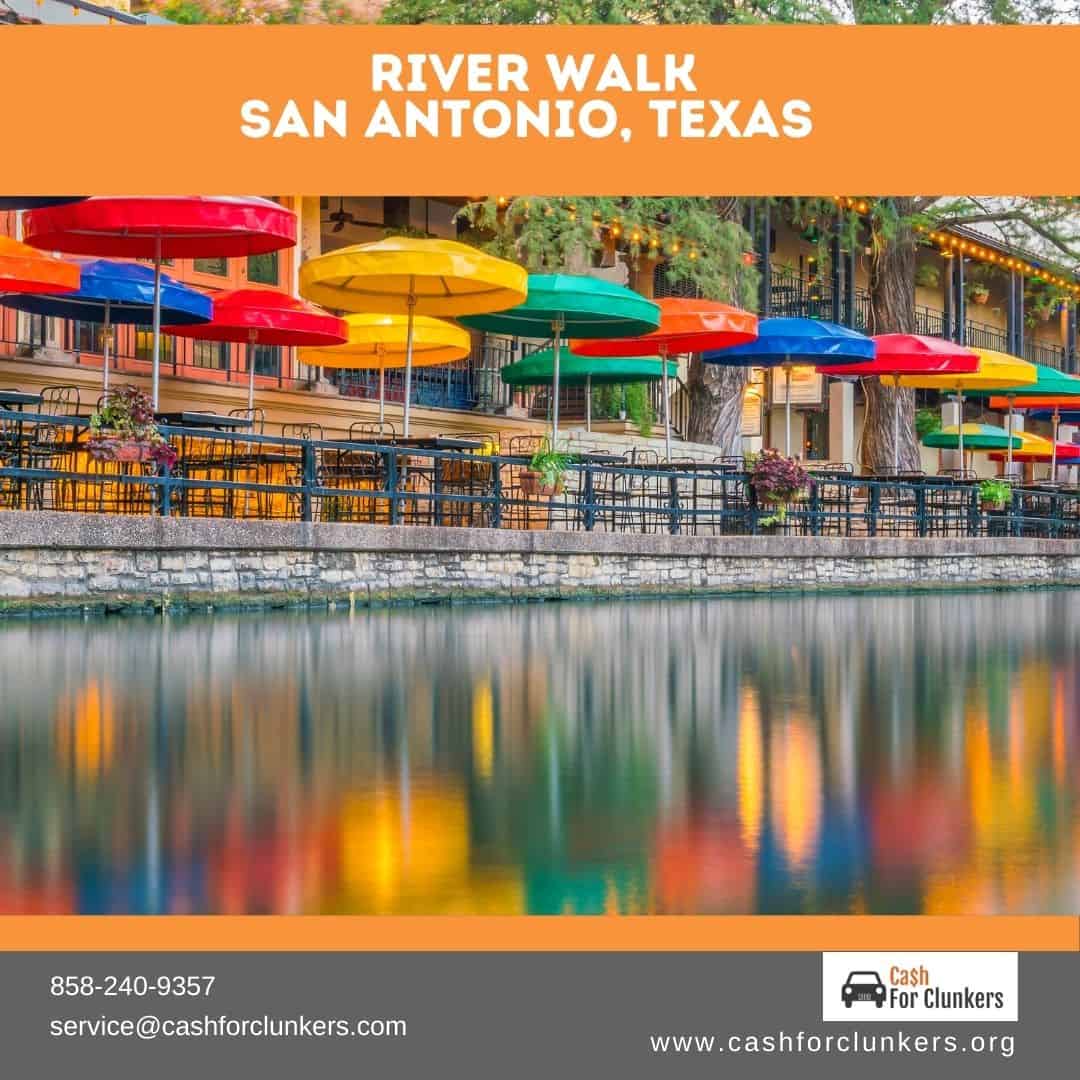 The Car Allowance Rebate System, or CARS, originally began and ended in 2009 under the Obama administration. It was a government-funded program to help people trade in old, less fuel-efficient cars for more fuel-conserving vehicles, and it was similar to the Aircheck Texas car voucher program that ended in 2017.

Conducted both as a pro-environmentalist campaign and a post-recession boost to auto sales, the program was in high demand and quickly burned through their initial $1 billion. Congress approved a $2 billion boost, but that too was gone before 2010, ending the program. 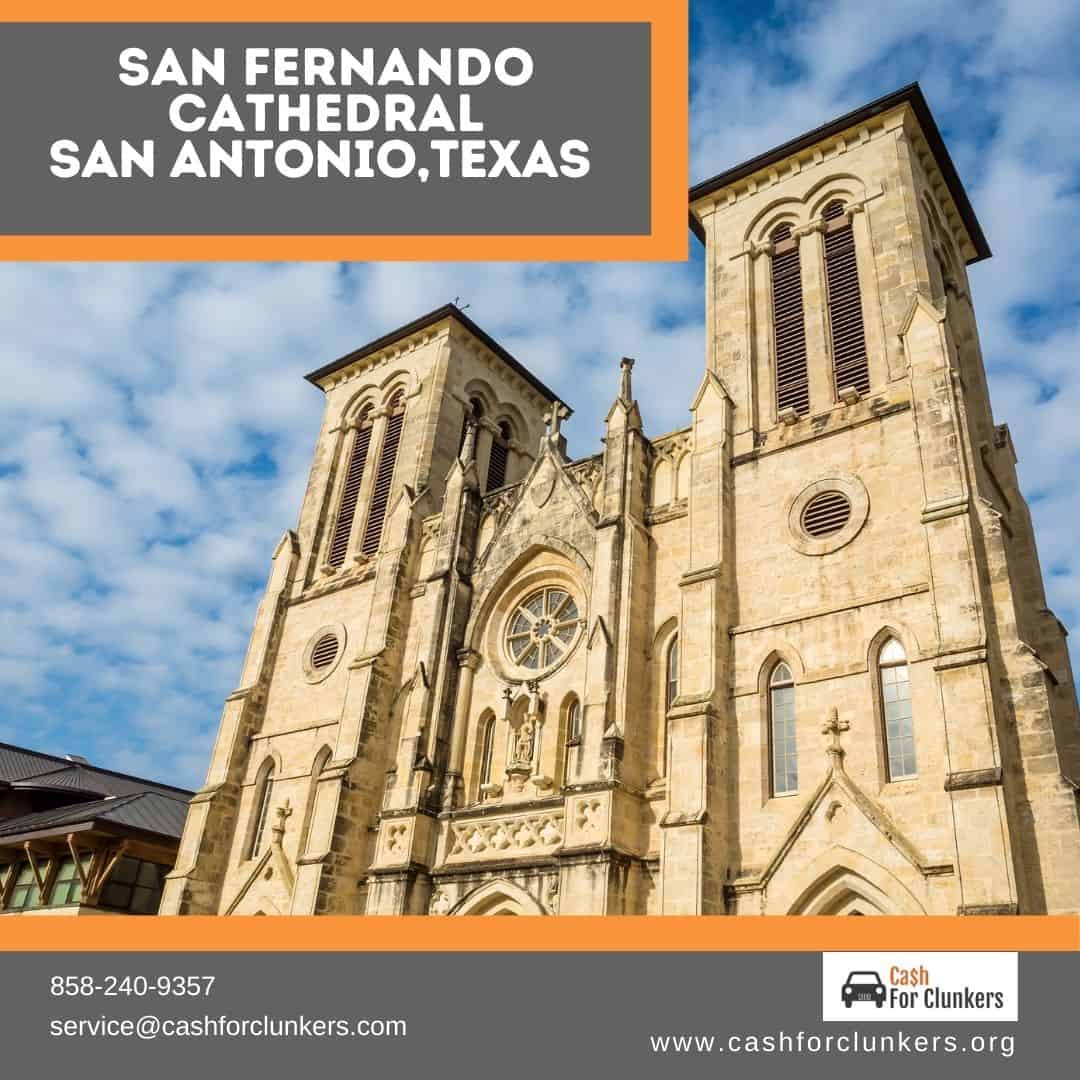 However, CARS was limited by strict criteria. For instance, the car had to be less than 25 years old and drivable. Different criteria existed for trucks, SUVs, and vans. Additionally, there was only so much money given back to participants, who often had to wait up to eight weeks before receiving their money.

The idea of a new federal Cash for Clunkers program was thrown around but ultimately decided against in 2021. There is still talk of the program with possible plans to bring it back to encourage the switch to electric and hybrid cars. However, even if a federal Cash for Clunkers program comes back, it will likely have similar problems to its predecessor – slow payments and cash limits. 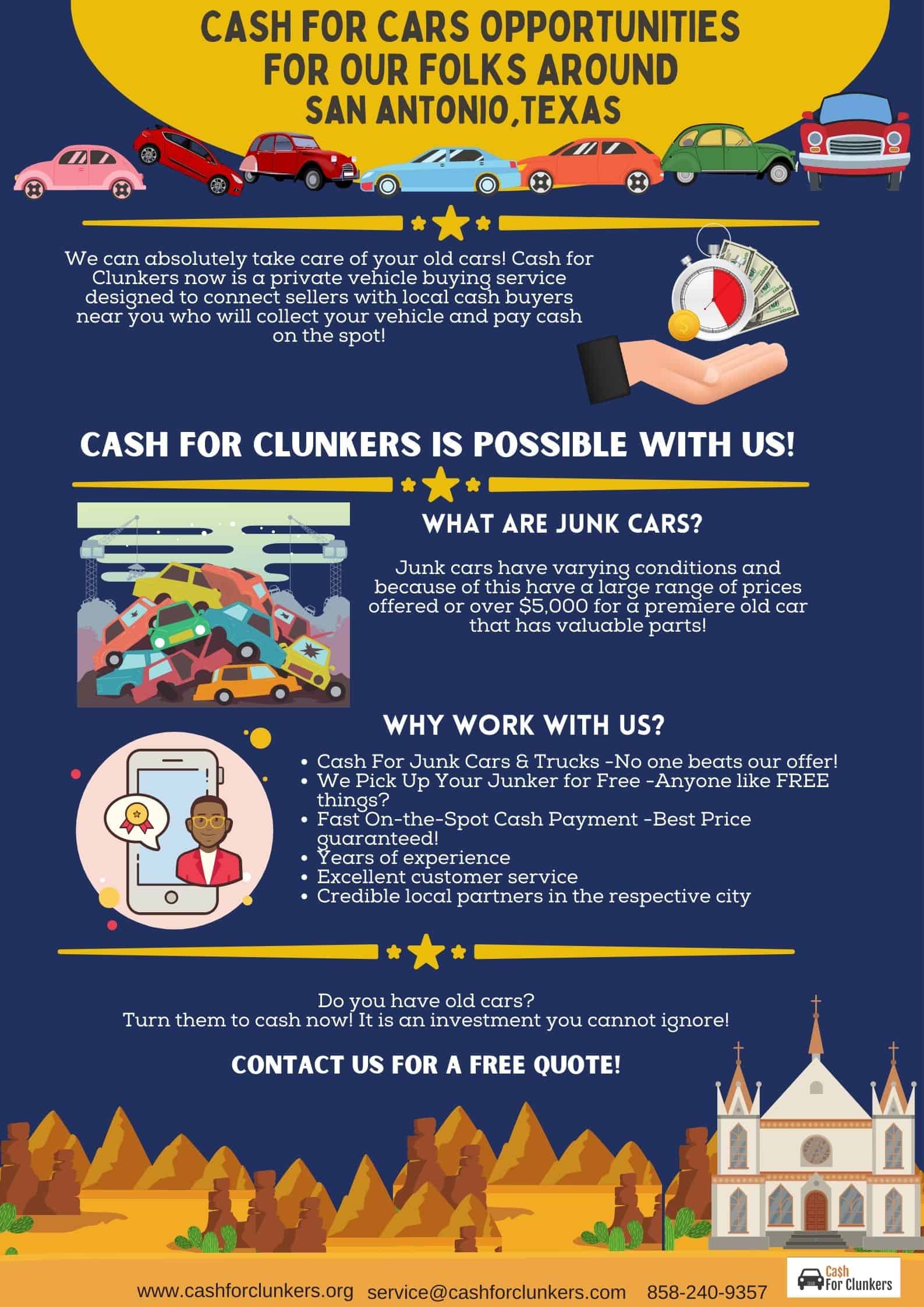 Why Choose Cash for Clunkers

CashforClunkers.org is your best bet for getting fast and easy cash for cars in San Antonio. Some benefits of choosing Cash for Clunkers over another private program or a federal program include:

While you are under no obligation with Cash for Clunkers, you should still act fast – your clunker depreciates in value every day! 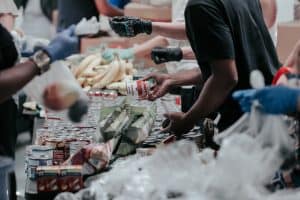 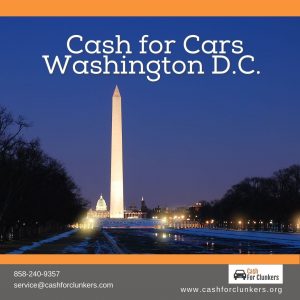 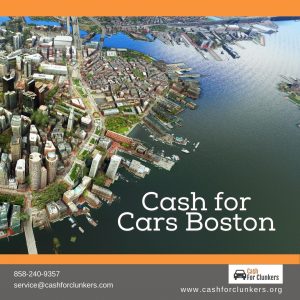